Well, the NRL season has already claimed its first casualty with Australian winger and Queensland Origin player Yow Yeh suffering a horrendous broken ankle in the 4th round clash with the Rabbitohs.Brisbane trailed 12-0 when Yow Yeh contested a kick with Rabbitohs winger Dylan Farrell, falling and landing awkwardly,causing serious damage to his ankle.It is not known yet whether he will be out for the 2012 season.
Although the Rabbitohs were solid in the first 35 minutes of the games, errors and sloppy play led to Brisbane taking the lead in a 20-12 win in front of nearly 16000 fans.
One of the NRL premiership favourites for 2012 are having a very shaky start to their season.The Wests Tigers were trounced 30-16 by an inform Raiders, led by skipper Terry Campese.Campese was on fire in front of a Wests home crowd at Campbelltown Stadium on Monday night outplaying his counterpart five-eighth Benji Marshall in a class display.Tries by Jarrod Croker,Sam Mataora,Campese,and Josh McCrone led to their first win against Wests since the joint venture.Sloppy play and missed tackles ruled the Wests Tigers game.They will need to rethink their game plan this week when they come up against the Rabbitohs, and again they will be without Robbie Farah as he has one week remaining on his suspension.Both teams will be out to prove themselves this week with both having shocking starts to the season and both desperately needing a win under their belts to remain in contention for this season. 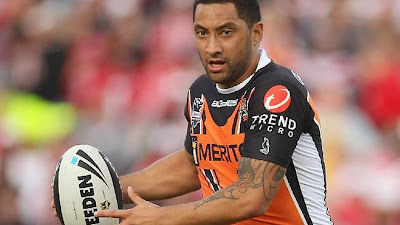 How do you think should be the Five-eighth for NSW?

Is Todd Carney living up to expectation?

Let us know your comments
Posted by Sportsmagic at 04:06